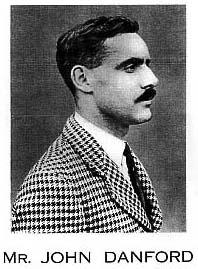 Danford was the British representative of the Council of Trinidad, Barbados, the Westward and Leeward Islands and also British Counsel to Ganbia, Africa. He was also a very talented painter and sculptor and to this day there is ample evidence of the man’s immense talents in each room in the East Wing, especially in the large ground floor room known as the Ballroom. Here each of these fine works of art are explained in his own handwriting.

The property has its own private quay and the remains of the boathouse, which was much used in the past by the Bleasby family and others to follow. As one views the splendid lawns that front the house it can be seen that the game of croquet was a popular form of recreation. The estate also consisted of large glass houses, orchards and gardens, which for decades produced fruit and vegetables in abundance. The estate was tenderly cared for by generations of local families. 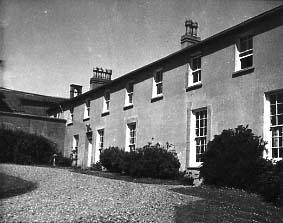 “ Mr. JOHN DANFORD is a young Sculptor and Painter who has already achieved unusual distinction. Among the many prizes, which have been awarded to him are the Royal Academy’s Silver Medal, and the British Institution Scholarship. Over the period of 170 years, winners of the much prized scholarship have utilised its advantages by conventional studies in Italy or France. Mr. Danford’s choice was distinctly original. Purchasing a `Baby’ Austin van, he equipped it as a temporary home and in it made a complete circuit of the Mediterranean, 17,000 miles of extraordinary interest trough 20 different countries. In its course, he passed by fascinating relics of ancient civilisations and his comments on Roman and Egyptian remains are those of the sculptor. At the same time he mingled intimately with living people, and his tropical observations on much discussed problems are of keen interest. His lectures are illustrated with unusual and beautiful slides – as might be expected of an artist. With a fascinating description of older civilisations and vivid discussion of modern problems are mingled strange and thrilling experiences which befell this young adventurer on his unusual journey.”

Although it is now over 34 years since my cousin is John Danford is died – in Ballinacurra in October 1970, at the age of 57 – I still have most vivid memories of both his artistic talents and his charismatic personality. John’s mother was the eldest of four sisters, of whom two remained unmarried and my mother was the youngest. He and I were the only offsprings and, although separated by a 25-year gap, came into contact quite regularly during his life. Himself unmarried, John was very family-minded and when visiting Ireland or England on leave from abroad made a point of seeing all his relatives. And when abroad, he sent them long and fascinating letters describing all his activities. I recall, for example, the time he acted as guide to the Queen and Prince Philip when they visited Nigeria and he showed them works of art – and also his description of the night when, lying in bed, he was all too aware of the sound of gunfire around his house (I think in Sierra Leone) when caught up in a revolution of some kind.

I really don’t know where is John ‘s artistic gift came from. Music was the art form in which many of that particular family were skilled, but John had clearly not inherited the music gene! His father, George Danford, was a farmer in Leixlip, Co Kildare, and John was born in Dublin in 1913. Sadly, his father died almost a year later and John was only five when his mother married Lieutenant Richard Kingston (always known as ‘King’) Jago (from Bantry) of the South Irish Horse. The family moved to London in 1921 and John’s education was in Hampstead and Sutton, Surrey, from where he won a scholarship to Wimbledon Art School. From there, at the age of 21, he was accepted into the Royal Academy and, while there, won several coveted prizes for both Art and Sculpture, including a year’s Travelling Scholarship. John’s unconventional approach was immediately apparent, in that he chose to spend his travels in small Austin van, which he equipped as a temporary home, and set out on a 17,000 mile journey which took him through 20 different countries. He turned this to good effect in the years that followed, giving a series of illustrated lectures detailing all aspects of his travels. The spark of adventure was certainly in him.

Then of course came War. John was already a Reserve Officer with royal Artillery and he served in France until the evacuation from Dunkirk. His knowledge of Africa gained through his scholarship year soon proved useful. He was transferred to the West African Frontier Force and served through the Burma campaign until demobilisation came in 1946. The war had been a stressful time for John’s mother in that both her husband, now a Brigadier with the ‘Sharpshooters’, and son were serving abroad, whilst she was living near London and coping alone with a battle against cancer, which fortunately she won. (My aunt and uncle died within a few days of each other, in 1974, and I well remember my aunt’s funeral in Rincurran).

With his African links now so strong, it was perhaps inevitable that John should soon return there, having been recruited by British Council.

In the post-war years, the British council – an organisation set up in 1934 to promote a wide Knowledge of the UK abroad and develop closer cultural relations with order countries – was expanding its work and John was clearly well suited for the role he then undertook. He first served as Regional Director in Ibadan, Western Nigeria, where his affinity for the people was strengthened further, and it was during the next ten years that he worked to promote the study of Nigerian art and built up what then became the largest private collection of West African art and artefacts, now housed in Birmingham University. Fortunately he never neglected his own painting and sculpture, and a number of his paintings and murals were created at that time. It was then that he was awarded the Order of the British Empire for services to education and to art, an honour which gave enormous pleasure.

John left Nigeria in 1957, and until he was forced to retire through ill-health in 1969 continued to work as Regional Director for the British Council: in Trinidad, Manchester and lastly in Sierra Leone. For me and my family John’s time in Manchester in the mid 60’s proved an unexpected bonus, as we saw him frequently. I was teaching in Macclesfield, some 20 miles away, and he and I had meals out and visited the cinema, etc. and I also attended various British Council functions. His forced retirement came chiefly as a result of his having saved the life of his steward boy from drowning in Sierra Leone and being flown home to England for treatment. I last saw John in University College Hospital in London, where I was shocked by his gaunt and aged appearance; my private fears were realised in his premature death just over a year later.

John had bought Ballinacurra in the 1950’s, with the intention of restoring it and ultimately retiring to his native Ireland. He installed his parents – who had moved to Summer Cove on my uncle’s retirement from the Army in 1950 – in the main part of the house and during his vacations he set about his ‘project’, so much of which he left uncompleted but which is now being magnificently realised under the present owners. Much of ‘John Danford’ remains there. In particular, his desire to create a number of themed rooms, to house the many items he had collected over the years, has been developed further. In the time he had to work on the house John created five specialised rooms – African, Elizabethan, Georgian, Japanese and Victorian – as well as the magnificent ballroom, some details of which still remain. During my visits John always arranged at least one splendid party and that room was seen to good effect by the Jago’s many friends who included Elizabeth Bowen, the well-known novelist, and a host of other interesting and distinguished local people.

John hoped to fill his house with many of his own works, and he once told me that his dream would be to leave it to the nation. Alas for his untimely death – but I know he would welcome the ways in which his beloved Ballinacurra is being brought to life again.

John Danford was a fascinating, complex character, a touch eccentric and someone, I’m sure , whose family knew only a little of his inner life. He was warm-hearted, kind and generous, someone with a great sense of humour and loved by many. Those who met him never forgot the experience.